With the release of fdk v7.0, developers who maintain existing apps on the Freshworks Developer Platform need to make a few changes to their apps to successfully upgrade to use fdk v7.0. This article details the changes required.

These steps are necessary to publish a new app, or update an existing app, to run on Node.js v12 or later.

However, you should not make these changes by hand. fdk will populate these fields. With fdk 7 installed, run this in your app’s root directory:

If you are upgrading from Node.js v10, or if you happen to have a different major version of the Node.js runtime available in the current session, fdk will show a prompt saying it wants to do the following:

Choosing “Y” will apply the changes for you. 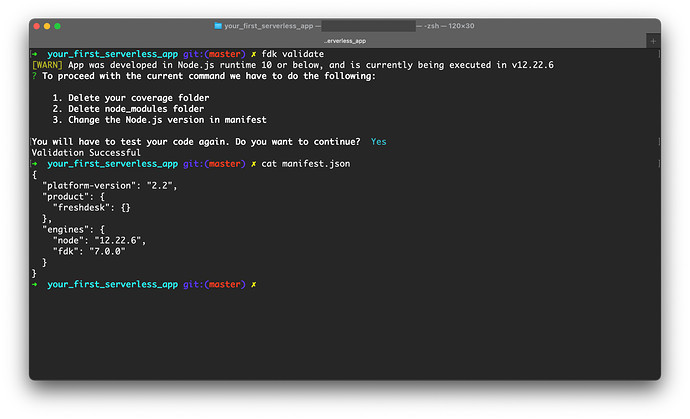 Tip: Before proceeding, make sure to fix any errors reported by fdk validate. It’s a good idea to create a separate commit in your app’s source code repository with the changes made to manifest.json.

Note: Apps whose manifest.json do not contain an engines property will continue to be deployed to Node.js v10 till Node.js v10 is fully deprecated by the Platform.

Since the previous step will delete the coverage/ folder, we recommend you test your app again using Node.js v12. This will involve running any unit tests you may have written for the app as well as using fdk run and testing the app manually.

Since ES6 is now supported in apps, you can also take this opportunity to upgrade your app’s code to use ES6 constructs and keywords, if you’d like. Here are a few useful upgrades you can make to your code.

Note: ES6 experimental modules syntax is not supported yet. So, import and export won’t work.

Use let and const

So, instead of writing:

You can now use async/await syntax in apps. So, instead of using Promise callbacks, you can update code like this:

If you face any issues in migrating your app, please open a new thread and we will help you solve any issues you face.

3 Likes
Sorry! We accept app manifest with Node.js runtime 12 only
FDK v7.0 - Announcing Node.js v12 and ES6+ support
Does FDK support Async/Await?
Unable to upload my code on fresh desk it give error "Packing failed due to the following issue(s): [ERROR] Invalid platform version mentioned in manifest.json - 2.2"
Bring async/await support to FDK
[App 2.2] Could not parse the app manifest file in the current/specified directory