How to handle exceptions in a freshdesk serverless app

Hi everyone, I’m new to freshdesk development and I’m having trouble in how to handle exceptions in a serverless app.

But when I go to the serverless logs, the following error appears:

Basically it says that $request.post(…).then(…).catch is not a function. So, I want to know if .catch works or not in a serverless app or I need to do something else.

When you call $request, on the .then(), you need to pass callback functions:

Thanks, I thought using .catch was supported.

@Matheus_Souza_Silva Even I wonder why .catch is not supported when the $request or $db methods always return a promise.

It is because according to $request, $db a successful response from the external server($request) and Db service respectively is still a success. Only if the services are down, the catch is reached. That’s the reason both response and error object are resolved

Adding on to @shravan.balasubraman, the confusion on the catch block might also arise due to the promise polyfills used in the APIs.
For example, if we observe the Request API behavior,
(Server-Side) It would result in an error if an ES6 promise-styled catch block is used. 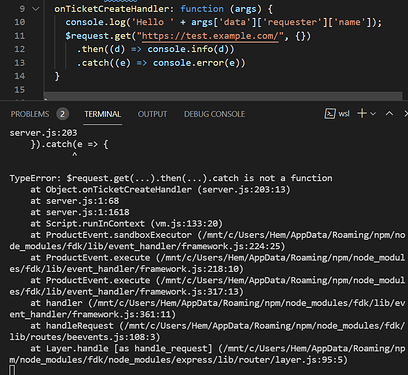 image864×793 80.6 KB
However, a fail block would work very similarly to a catch block due to the polyfill. 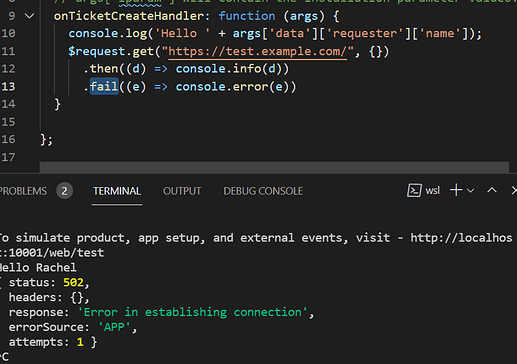 (Frontend) If we observe its behavior in the frontend, it would be very much in line with ES6 promises.

! A good thing is that there is a common pattern that works across all regardless of the polyfills. This is what @samuelpares has recommended in his solution too.
ES6 Promise behavior (without an explicit catch block. error handled in the second fn. arg) 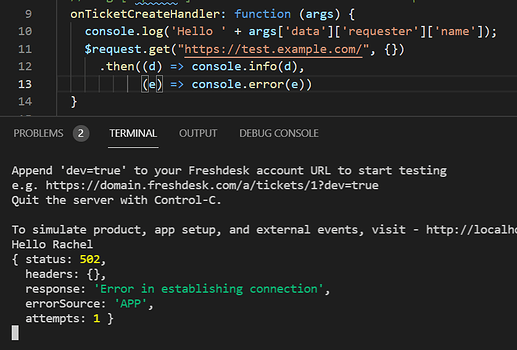 Although this is a nuance in the way promises operate in the context of the developer platform, it could definitely remove a lot of confusion down the lane.