What is Code Coverage?

Code coverage is also known as test coverage. It is a measurement of the extent of code executed during a test suite. Test Suites are a set of test cases or scenarios to run the code in a certain flow to get the code executed in an anticipated manner.

Code coverage tools help track the code that has been executed and that is not executed. The tools provide code coverage reports as a result with coverage information for each of the code lines in the codebase. The uncovered code can be found in this report and tested later with the required test cases to get complete code coverage.

Istanbul is one of the popular code coverage tools that is used in the Freshworks CLI (FDK) to generate the code coverage report within the local environment during the app testing.

Why Code coverage is required

This also lets the app developer catch any issues with the app code earlier by testing the app in the local environment with the help of Freshworks CLI. It improves the success rate of app submission. Nobody would want to get their app rejected after the submission due to any issues with the app functionality. At the end of the day, a greater customer experience is delivered with issue-free apps, and everyone involved benefits from it.

How to get code coverage

Just testing the app in the local environment with the Freshworks CLI is enough. Everything else is automated. The test report will be ready when the CLI is stopped from running with CTRL+C or CMD+C commands. The code coverage result looks similar to this result.

When the app is packed, these results are attached along with the app so that the app reviewers from the Freshworks Developer Platform can obtain it. The app would get automatically rejected if the results are not attached or the code coverage is lesser than the required threshold.

How to check the code coverage results

The report shows file-wise code coverage with color codings and more details as shown. The report gets updated automatically after every code execution. The uncovered code can then be checked in an appropriate file to cover them with the test case that it requires. 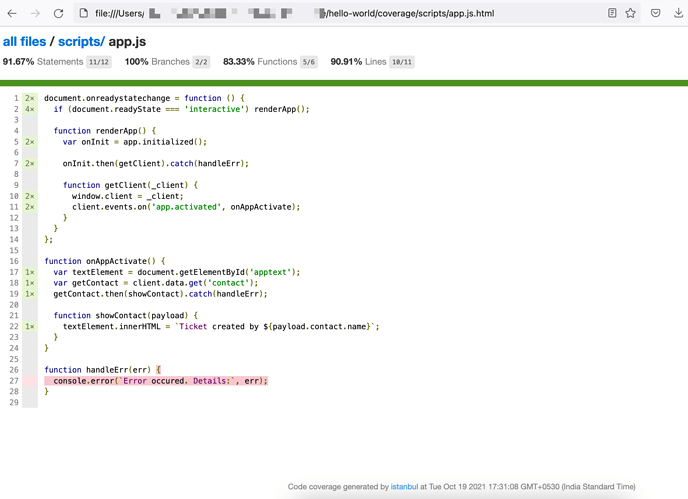 How to improve the code coverage result

Also, refer to the blog on code review guidelines that adds some tips to improve the code coverage.

Note: Apps built with any frontend framework or involve code compilation and minification, the app code will get changed when the app is built and attached to be published. Code coverage cannot be achieved for these apps. Reach out to the Freshworks team through dev-assist.freshworks.com after submitting the app to get the code coverage requirement skipped.